A very good new track & video by Leeds band Glassbody. I first saw them in the heats of Centre Stage in Leeds, where they went on to win in the O2 Academy Leeds. A Leeds/Reading Festival appearance followed and they really went for it. Impressing the crowds at both sites. Now a year on they have impressed me again with this new release.

Love this new video by Yorkshire band The Beaus

They’ve been around for a few years now, developing the craft. One thing that has developed alongside their music, is their ability to make their own videos really well. This video should also gain them a few Bob Hope fans too, hopefully.

I’m consolidating my blogs into this one. So here’s a quick run of recommendations that I have posted before elsewhere. Just to get it all on one page from now on.

It’s me again being interviewed at Leeds Festival about BBC Introducing, Glassbody, Centre Stage, Pulled Apart by Horses and more

Love of The Brave

I’ve been into this band for just over year now, since seeing them at The Library in Leeds. I’ve now seen them 4 more times live and love them all the more for it. After uploading their tracks to the BBC Introducing Uploader and impressing the Leeds based Producer at the time Graham Albans (now at BBC Radio 2) they got a session on BBC Introducing West Yorkshire. This lead to a recommendation and subsequent appearance on the BBC Introducing Stage at Leeds/Reading Festival. The drummer is a genius, the vocals are gorging and that slowed down house sound is well sexy. I caught up with them shortly after Leeds Fest, at The Library again:

Apart from the fact that I was embarrassingly fat when filming this, it is one of the few times that I have seen myself do an interview on screen and not cringed deeply. I think it’s because despite their popularity, the band weren’t too cool to talk to me, like many are. In fact they are one of the nicest groups of people I have found in this industry. Make friends with them yourself here: http://www.blackdiamondbay.co.uk/

Like Loading...
Kliene Schweine packed out Milos for Live at Leeds yesterday. There was just enough room for the band to wield their instruments 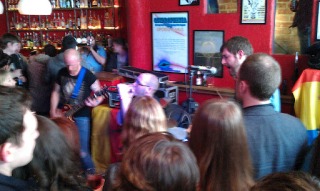 and Bart played till his fingers bled. 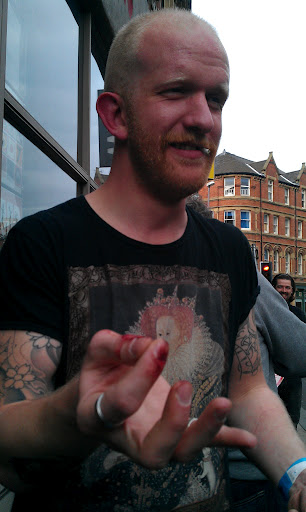 Like Loading...
It’s Saturday, the morning after a mammoth gig at The Library in Leeds. In fact this is the first time I’ve been able to sit down and grab five minutes to post on here, since Wednesday. “Why is your time management so inadequate?” I hear you cry. Because for a sad old music geek like me, this week has been like a wheely-bin of roast turkeys to a rabid Jack Russell.
Thursday night on the radio with talented young newcomers; Traffic Wire, monsters of rock Mr. Shiraz and pig masked dictators of Leeds Kliene Schweine. Plus special guests; Simon Fogal from I Like Trains and Si Glacken from Live at Leeds & I Like Press with a beautiful vinyl album of The Shallows by I like Trains for me to drool over.
After the show the beer did flow, I talked country music with the the Kliene boys and saw Isaac Heywood get his funk on with Funky butt Chunky , in aid of Martin House down in The Wardrobe. The night took a turn for the worst when I found I had nowhere to throw my sleeping bag. I told my mate I’d come in my camper, but no, he talked me into staying at his. Great plan, until he passed out on the sofa and the thundering of his own snoring, drowned out my efforts to kick his door in.
Friday, bright and early I was first in line for The Unconference as The legendary TomRobinson was making the opening speech. Well what a speech it was. I felt inspired, in awe and rather inadequate after that. Especially because I was booked for the “ask the experts” session. Luckily Tom had left to do his brilliant radio show by then. So I felt I could actually give people the benefit of my comparatively minuscule experience.
During the demo listening session, I was sat in the crowd listening to bands that I have supported getting critiqued, including Backyards who didn’t go down very well (so wrong) and Navajo Youth who did a little better. Both acts who I rate much more highly than the panel did, but in conversation with them later they said that they found the judgements useful and would take the experts advice on-board.
Whiskers did a stirling job of the Unconference and overall it was a very informative event.
As soon as it finished me and fellow speaker Richard Watson of 360 Club(Legend), had to burn rubber to get to his event at The Library. The line up was four greats on one stage: Indecision, the afore mentioned Backyards, along with Black Diamond Bay and Danny Toeman. My voluntary role was to interview the bands and facilitate the making of videos to promote them, DJ new music, play whatever demo’s that people brought in and be the master of ceremonies. Unlike my part, the stage saw an epic mind melt of musical wizardry and multiple styles of creative talent i.e. four bloomin great bands. The club was packed with happy music lovers, dancing their pants off all night. I even spotted Middleman whistling from the crowd for Black Diamond Bay.  I was also impressed to see so many good people of the music press in attendance. I look forward to seeing what Leeds Music Scene, No-TiTLE and Vibrations thought of it.

Anyway it’s still Saturday morning and I’m out of my sleeping bag and stuffed with complimentary toast. So before I dive into the madness of Live at Leeds, I’ll give you my Raw recommendations:
Kliene Schweine http://kleineschweine.bandcamp.com/
Check out their darts video, it’s sporting genius
You can also join in with their pledge campaign to make their album. Tom Robinson has already pledged £25 to sing backing vocals on it. http://www.pledgemusic.com/projects/kleineschweine pig masks are optional.
Navajo Youth http://www.navajoyouth.co.uk
Think 80’s pop and Miami Vice fashion meets the sound track to a night out in Leeds with the cool kids and Heads We Dance.
I gave the new single it’s first play last night
I Like Trains http://www.iliketrains.co.uk
A band who I have been a fan of for at least 7 years now. I introduced them to the LeedsFestival stage 6 years back and have been waiting for their latest album for far too long. It’s called  ‘The Shallows’ and it is beautiful.

Now I need to do at least 4 today because I intend to do 7 recommendations a week and so far I’ve only done 2.
So last but not least, from last nights gig Danny Toeman http://www.facebook.com/profile.php?id=1331763328 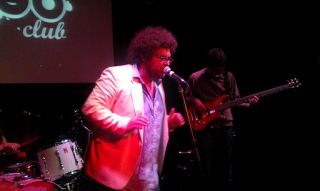 He is the Funkiest Funker in Funky Town (Leeds on this occasion). Big voice, big hair and big in general really. He also has a real gift for song writing. Check him out funk lovers.

This brilliant device is the home made guitar amp, used on stage by Tsar Nicholas III & The Exiles. It was made from a vintage record box and it sounds lovely.
The gig was a marvel too and I highly recommend you get to their next one.

In the mean time in-between time check out this here video:
Say hello to the band on facebook here:
http://www.facebook.com/pages/Tsar-Nicholas-III-and-the-Exiles/126111840811252

Like Loading...
Although Thank Pablo are based in London, 3 of the 4 piece band are from Hull.
“My Favourite Subject” is a great summer track! Checkem out!

In fear of Olive from Doncaster area, are very impresive live. Great songs, so well written and performed with style and attitude. I highly recommend them. My favourite of their songs so far is Saluting magpies.

Saw some very fine bands at The Library in Leeds this week. One of which was a complete surprise to me. I had no idea that they would be so good and don’t where they have been hiding. A band this good in my area, usually gets talked about within my earshot at some point before such an accomplished performance. Definately one to watch: Return To Aljustrel.
http://www.facebook.com/returntoaljustrel

Just on the off chance that you are not yet aware of the incredible Middleman, I thought I better get them in the list. They are one of my favourite EVER bands. spinning plates is a great single, a great album and a great video, but most of all an exceptional lyrical work of art. Yes it really is that well penned.

That completes this weeks seven of the best, enjoy 🙂